A woman of many talents – a martial artist, a dancer and choreographer, an actress and a model. Black Canary, Lara Croft or Knuckles from Slug Street Scrappers – all these roles in independent but at the same time very succesful productions brought her great popularity and respect among fans from all over the world. In the videos she makes for her YouTube channel she does not only teach martial arts but also answers the questions from fans in her unique, witty way. At the same time she is a really nice, modest person (as all my interlocutors so far, I must say). By the way, today she celebrates her birthday, so you can send her birthday wishes – you will find the link to her FB page below the interview. Although she was really busy this summer, she managed to devote some time to answer my questions in this “remote talk”. Check what she says about her films, martial arts, dancing and her hobbies. How did her first martial arts class look? Does she like films about dancing? What is her advice for Hollywood producers? Read the interview and you will know. 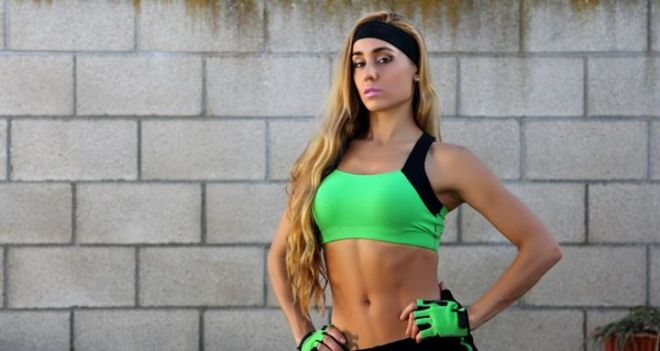 We could already see some photos from the set of a new film you are working on (they are pretty awesome by the way) on your Facebook. Can you say anything more about this new film?

Yes. Thank you! The project is temporarily called “G” on IMDB. It is directed and produced by Patrick Kilpatrick, with all rights reserved to Uncommon Dialogue Films. So far, we are still going through extensive fire arms training etc. I cannot say too much about the film. However, so far, it is a lot of fun and it has a very exciting cast with some famous fighters.

Some time ago someone on Facebook asked, ”What is your ancestry?” and someone else immediately answered,“ Ninja”. I’d like to ask about your ‘martial arts ancestry’. Do you remember who or what encouraged you to start training martial arts?

Well, growing up I tried through various styles of martial arts, but once I saw the film Hero with Jet Li, I completely changed course in my training into serious wushu. That let to muay thai and Brazilian jiu jitsu.

Did you watch any martial arts movies when you were a child? What were your favourite movies of this genre?

Yes. I watched many martial arts films but mainly because all my older brothers always had them playing. But as far as that genre, as a kid I thought the video game Mortal Kombat was the coolest thing in the world and I wanted to be one of them hahaha.

Do you remember the first training, the first day with martial arts? What was it, what style? What was your first impression?

My first class ever was a tae kwon do class and I was pretty young. I was an extremely goofy, high energy kid. By my second class the instructor told my mom maybe martial arts wasn’t for me and not to bring me back hahaha.

What styles did you and do you train ?

There were probably three moments when the number of your fans started growing faster and I’d like to ask about them now. The first one, I think, was your role in City of Scars, an independent Batman movie, by many viewers considered to be the best fan film about Batman. How was it to play Black Canary in it?

It was great. Working with Aaron, the director of City of Scars, is always exciting. Playing Black Canary was fun because I always enjoy this type of roles as well as whatever ideas he has. It’s always fun. 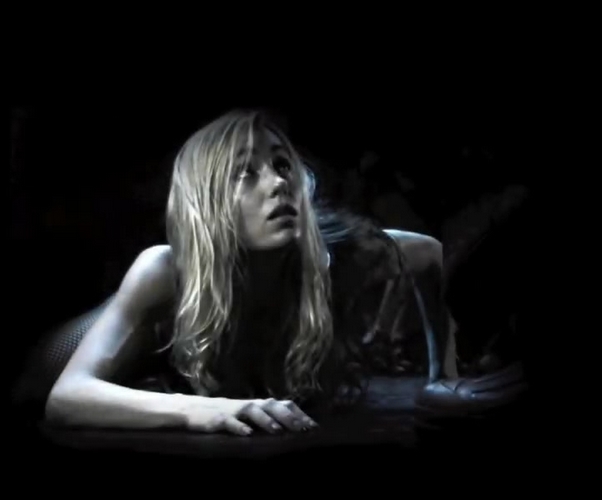 By the way, which version of Batman on the big screen do you like most? The new trilogy with Christian Bale or one of the old movies?

I guess a combination of both. To be honest, I think Hollywood needs to open their door to directors like Aaron and Bat in the Sun Productions. It is time for some new blood to circulate through Hollywood’s big budget productions.

If I have a chance to ask an expert, let me ask you – which professional film actor or actress, which movie star, is the best in martial arts in your opinion?

Jackie Chan for his charisma and he broke out of the mold. He could also make people laugh,
but of course I like them all: Bruce Lee, Jet Li, Donnie Yen. From that classic era. That is a tough question.

The second movie from the triad I’ve mentioned is Slug Street Scrappers 2 where you played Knuckles. That wasn’t your first time in this kind of production – action plus comedy. Do you like this kind of work? Did anything funny happen on set?

Yes, actually this kind of work is my favorite. There is always a bunch of laughs on set, even though the work is very hard. Funny stuff always happens on set, to be honest it is hard to keep track. 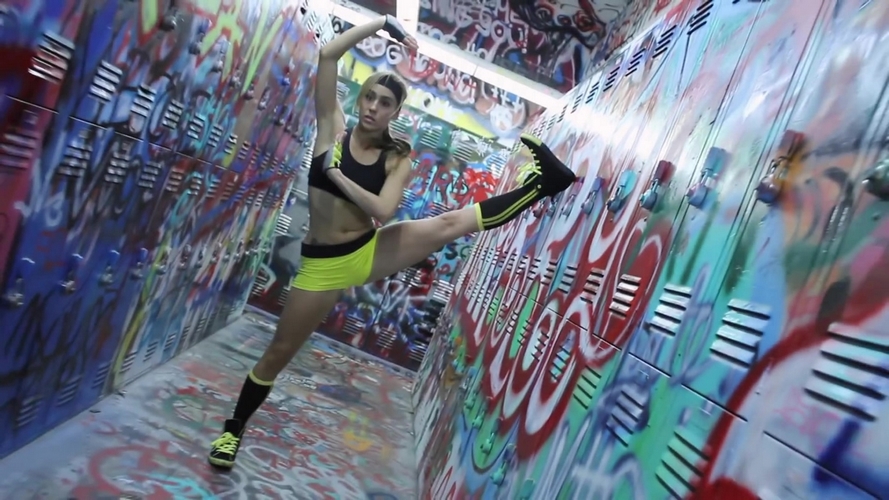 If we talk about funny movies, what or who makes you laugh?

Will Ferrel always makes me laugh for sure. Also Sponge Bob is still one of my favorite things to watch haha.

Finally, the third role from the list. In Super Power Beat Down you portrayed one of the most popular heroins in the history of pop culture – Lara Croft from Tomb Raider games. How was it to face playing an almost legendary character?

Playing Lara was amazing but, yes, a lot of pressure because the character is so well known. I was going through a lot in my life at the time I was filming it so I love looking back sometimes and watching it. 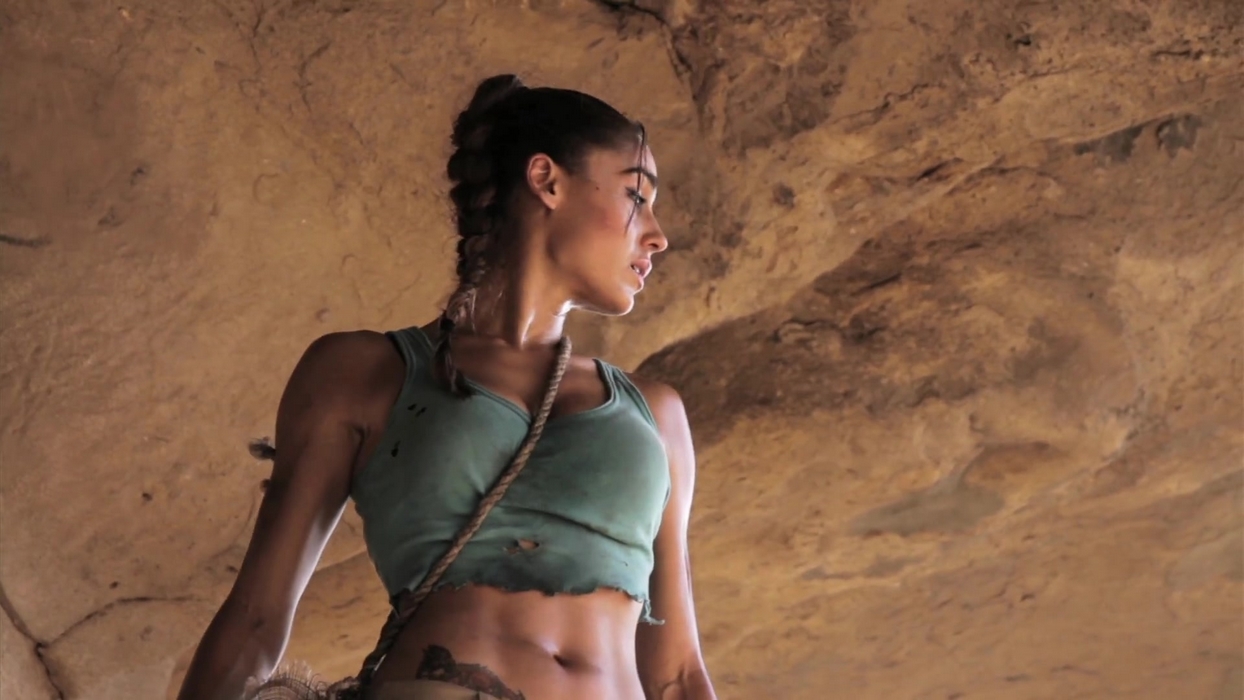 Both City of Scars and your episode of Super Power Beat Down were produced by Bat in the Sun. Is there any chance that you may work with them again?

Yes, actually we have been talking recently and trying to figure out a good character for me to play and a good opponent as well.

Do you play computer games? If so, have you ever played Tomb Raider? Have you seen the newest part of Lara Croft’s adventures? What do you think of it?

I don’t really have a lot of time for computer games right now. The only thing I am playing now here and there is Rayman on the PS4. For the newer Lara Croft game, I have not played it but I’ve seen a bit of it. It seems cool, I guess, but I like the old school Lara Croft look. 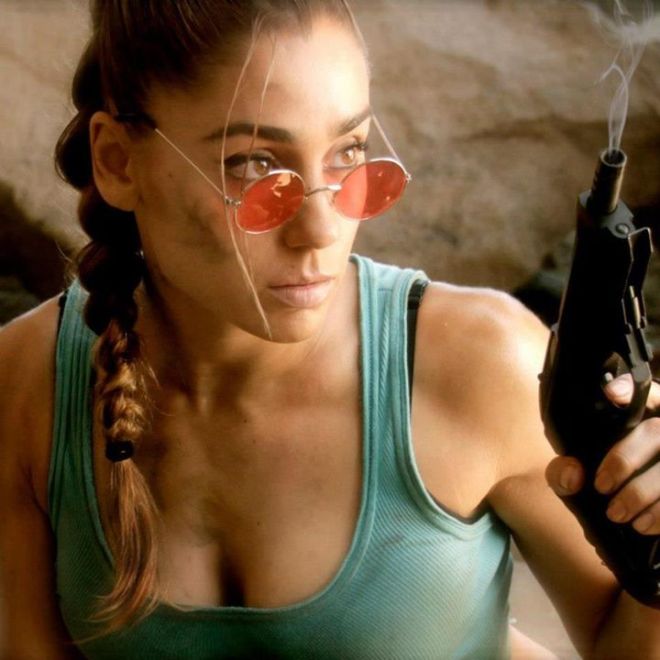 You did not only portray a character from computer games in a film, but you also ‘played’ in computer games. Your performance was used in Call of Duty and X-Men: Destiny. How did that work look like? How much did it differ from playing in a movie?

It is very different than filming a movie. Motion capture is what you call it – for video games capturing as well as things like Avatar. You wear the unitard with sensors all over you to pick up your motions with advanced equipment.

The list of movies and series you appeared in includes also mainstream productions, like True Blood, Burlesque or Just Go With It. Which of them would you choose as the best or the most pleasant experience?

I didn’t really like filming on big sets. People have big egos there and there is too much unnecessary stress most of the time. At least that’s what I experienced so far. I love Indie films better. More honest and creative people. 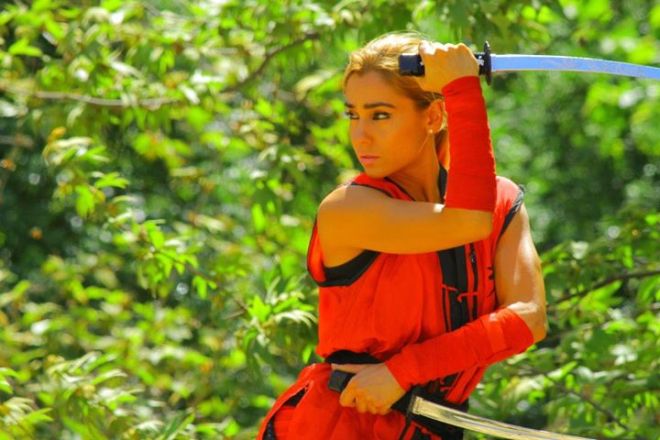 Would you like to play a bigger role in a movie not at all connected with martial arts? What kind of role would that be?

Yes, of course. A heavy acting role and a dance based film would be great.

You’ve mentioned dancing. You are not only a martial artist, an actress and a model, but also a ballet dancer. When did you start dancing?

Pretty much when I was a baby. My mom was making me dance since she was a dancer with San Francisco Ballet and then had her own school.

What was the most important experience for you as a ballet dancer?
First learning how to dance with a full live orchestra.

You are also a choreographer. Could you say a few words about this side of your career?

I really like choreographing and as an artist have had so many ideas but it is rare to be able to work with everything you need. Maybe in the future I will choreograph again if a company invites me to.

This is a common question I get asked and I always say Dance and Martial arts are both languages and that is why people relate them. However, they are extremely different languages. One may benefit the other but the intent while practicing one should never cross over. And what I mean by intent is like what are you painting in your mind with your body.

Do you sometimes watch movies about dancers? What is your favourite one?

I really liked “Chicago”. I would love to be in a film this style as well.

What do you like doing when you have some time for yourself? What books do you like?

I am an artist so I love drawing and painting. Creating anything really. I also like to garden and bonsai as well. I love my pets too so I’m always giving them attention. As for books, I like spiritual, philosophical books and I do a lot of research about nutrition, sports nutrition, herbal remedies and natural healing of the body.

Would you like to add anything at the end? Maybe some free, spontaneous thoughts that come to your mind, something you would like to say to the readers?

If I had listed to people in my life along the way, I would not be doing what I am because so many told me that I could not. Or that I don’t have the right look. So I guess what I’m trying to say to everyone is: just follow your own individual path and don’t seek approval from anyone.
We all have to realize that art is the highest form of true expression, communication and intelligence. It is what unites us all globally, whatever type of art it is. I believe we all are artists inside, just some people get molded to fit into society’s box.

Thank you very much. I’m really glad you managed to take some time to answer my questions. I hope you’ll make your dreams come true – in all the kinds of your work and art.

An interview by Łukasz Garbol, summer 2014

A few useful links worth checking:

“City of Scars” by Aaron Schoenke

Most of the photos from the official Facebook page of Tess Kielhamer. Photo 1 by Micah Brock, Photo 2 (from the set) by Uncommon Dialogue Films, photos 3, 8 ,9 by Shaun Charney. Photo 4 – a frame from “City of Scars” by Aaron Schoenke. Photo 5 – a frame from “Kung Fu Girl vs Wushu Guy – MArtial Arts Action Scene” by Whirlwind Action. Photo 6 – a frame from “Lara Croft (“Tomb Raider”) vs Nathan Drake (“Uncharted”) -Super Power Beat Down – Episode 4″ by Aaron and Sean Schoenke / Bat in the Sun. Photo 7 (from the set) by Bat in the Sun. All photo copyrights belong to their respective owners.